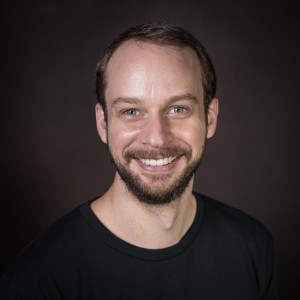 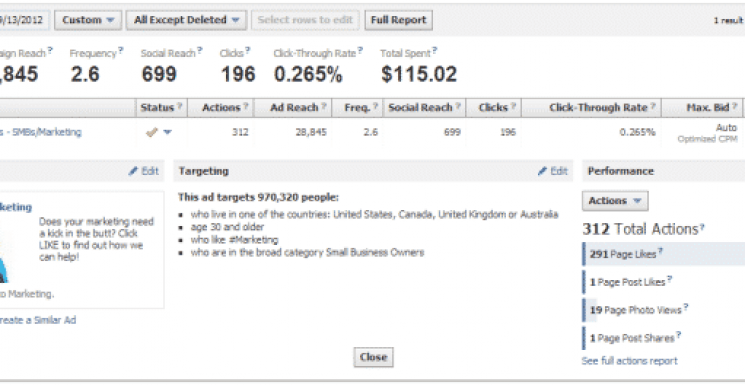 Facebook is an insanely powerful tool for any business when used correctly, but their advertising platform can also be a money pit if you’re not sure what you’re getting into. Towards the end of 2012, we started experimenting with the different ad types that Facebook offers – directing traffic to our website, promoting our posts and pushing for more Likes on our fan page. Initially the subsequent data looked really exciting, but as we dug deeper, we realized that the numbers reported by Facebook didn’t quite tell the whole story.

Over the course of a few weeks in September, we gained hundreds of new Likes on our business page through our various ad campaigns. One campaign in particular gave us 291 new Likes in just one week. At face value, our numbers were looking really solid: a CTR of 0.265% and Cost per Fan of $0.39. These aren’t mind-blowing numbers, but they’re nothing to be sneezed at either. So, we were all very much surprised with the results. Had we just stumbled upon the Easy Button for marketing? Are corporations spending millions on marketing when all they need to do is dump a few hundred dollars into Facebook? It doesn’t seem likely and we’re not quite that naive, so we started looking for better answers.

Digging for the truth

The first place we looked was at the profiles of the people who had Liked our page. At a glance, they seemed like normal Facebook users with profile pictures, information about their old schools and current jobs, etc. But we quickly noticed a trend amongst these profiles. Many of them had Liked a very large number of fan pages – some had Liked an outrageous and totally unreasonable number of pages with the highest coming in at over 20,000. We knew something fishy was going on, so we started collecting data. From a random sample of 100 Likes which we received while running our ad campaigns, 66 had public information on their profile. We noted how many pages they had Liked (we’ll call this Total Likes) and then came back a week later to see how many pages for which they’d clicked Like over the course of seven days (we’ll call this Likes per Week). The results were laughable. On average, the people that interacted with our page during our ad campaigns were already following 4,491 other businesses. And over the course of a week, they Liked an average of 147 new businesses. These are definitely people who aren’t going to be interacting with a brand in any meaningful way. It looks like we just wasted a few hundred bucks to boost some vanity metrics.

BTW, If you’re interested in learning about which metrics you should be paying attention to in social media, check out Parts 1, 2 and 3 of our series on how to measure social media success.

I already mentioned that the highest Total Likes we found was 20,000. There’s no way that person is even able to view posts from a faction of those pages. On top of that, the highest Likes per Week we found was 813 – that’s 116 new Likes per day! Ain’t nobody got time for that! Like any good data analyst, I wanted a set of control data against which to compare these numbers. So I ran the same test with a random sampling of my personal friends and got a Total Likes average of 96 and a Likes per Week average of just 0.8. So, yeah…that’s somewhat ridiculous… There’s one caveat I feel obligated to make here. The majority of my friends used in the control group are in their mid to late twenties, so they don’t necessarily represent the average Facebook user. As Facebook was created while we were in college, we view its purpose somewhat differently than would say, a 40-something business owner looking to do some networking. That being said, I can’t imagine that the average Total Likes for a typical user is more than a few hundred or that the average Likes per Week is more than 10 or so. So the profiles that Liked us during our ad campaign are wildly outside the norm.

Where are all these Likes coming from?

A few theories came to mind. Were these spammers? There are plenty of companies out there that will sell massive amounts of Likes for very little money. Maybe their fake profiles had run amok. Or maybe these profiles were created by spammers but run by bots that just click every single ad link they find. Or was there something even more devious going on? Was Facebook pushing fake Likes on pages just to drive their ad revenue? Probably not – that would be too risky for them, but the idea did cross our minds. In the end, it’s hard to say what’s really going on. Not matter how hard we racked our brains, we couldn’t think of any benefit for having a profile Like 20,000 pages – not matter whether that profile is controlled by a real person or a bot owned and operated by a company. Perhaps because we targeted people who are interested in marketing, we exposed ourselves to a higher level of spamminess. I am not saying that all marketers are spammers, but there are definitely plenty out there who don’t mind using more deceptive tactics to get themselves noticed.

So all of this begs the question, “If Facebook ads are driving useless Likes to my page, how do I get Likes from real people who genuinely want to interact with my company?” I think the answer to this doesn’t come down to any particular tactic or strategy. You can find plenty of information about various tactics for getting more Likes and increasing engagement covered on many other blogs, so let’s talk about something bigger – your brand. No matter how many sweepstakes you run or how intriguing your gated content is, you won’t build a rabid following of fans unless your brand, as a whole, is exciting and worthy of being engaged with. So what makes for an exciting brand? I would start by taking a look at the brands that you enjoy following. What do you like seeing from them? What makes you want to engage with them? There could be a number of factors that come into play here. Maybe they are thought leaders in the industry or maybe their posts are hilarious, informative, entertaining and inherently shareable. You should also take some time to consider who your audience is. If you’re trying to reach small business owners, you should work in some posts about business that aren’t necessarily directly related to your services. In the end, it comes down to running an exciting and fun company which you’re proud to share with the world. If your business is doing new and exciting things, there are certainly people out there who will want to hear about it. After all, everybody Likes to be entertained and informed. 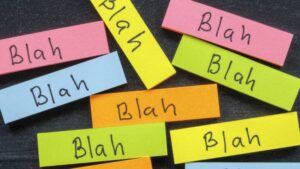 The Anatomy of an SEO Spam Message